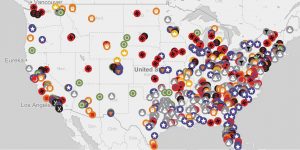 There has been a rise in racial hate since the election of Donald Trump as the President of the United States.  Currently, there are pver 892 hate groups  operating in the United States. Track them using a map compiled by the Southern Poverty Law Center. There seems to be correlation between Trump’s rhetoric and the increase in hate groups and hate crimes.

As Henry Louis Gates states in his article, “Why Are There So
America’s always had black inventors – even when the patent system explicitly
Harriet Tubman, that bold sister who escaped from slavery in Dorchester County,
The number of Americans renouncing their citizenship rose to a new record of 5,411
Chance the Rapper models #ThankUObama line that pays tribute to the 44th
Go to Top